The Sippy Softswitch has multiple layers of timeouts that are configurable to control the flow and quality of your calls. Timeouts provide multiple benefits to you as a Sippy operator, including quality assurance, the provision of an added layer of logic for routing optimization, and call redirection accommodating user preferences.

Timeouts are imposed on outbound/upstream traffic to ensure the quality of your connections is delivered. Route forwarding occurs within your routing table to attempt to terminate the call through successive Routing Entries in the event that a gateway (Vendor > Connection) cannot be reached for any number of reasons. Adjusting multiple timeouts is possible with Sippy to empower you to configure routing preferences that are better suited to your network characteristics.

Inbound traffic timeouts depict the call flow of the call through your customer's preferred termination points and the total time that the originating caller waits. Inbound timeouts empower the control over Call Forwarding attempts to multiple selections, Voicemail, and a total time for all termination attempts.

Outbound/Upstream traffic timeouts and their order

Outbound traffic is the calls that have originated at your customer's UA or IP that are sent to your Sippy Softswitch for terminating through your destinations. Calls are Authenticated to an Account, billed by the Tariff associated to the Account's Balance, and routed according to the Routing Entries that are configured in your Routing Group. The calls are passed to your Vendor/Supplier for termination. 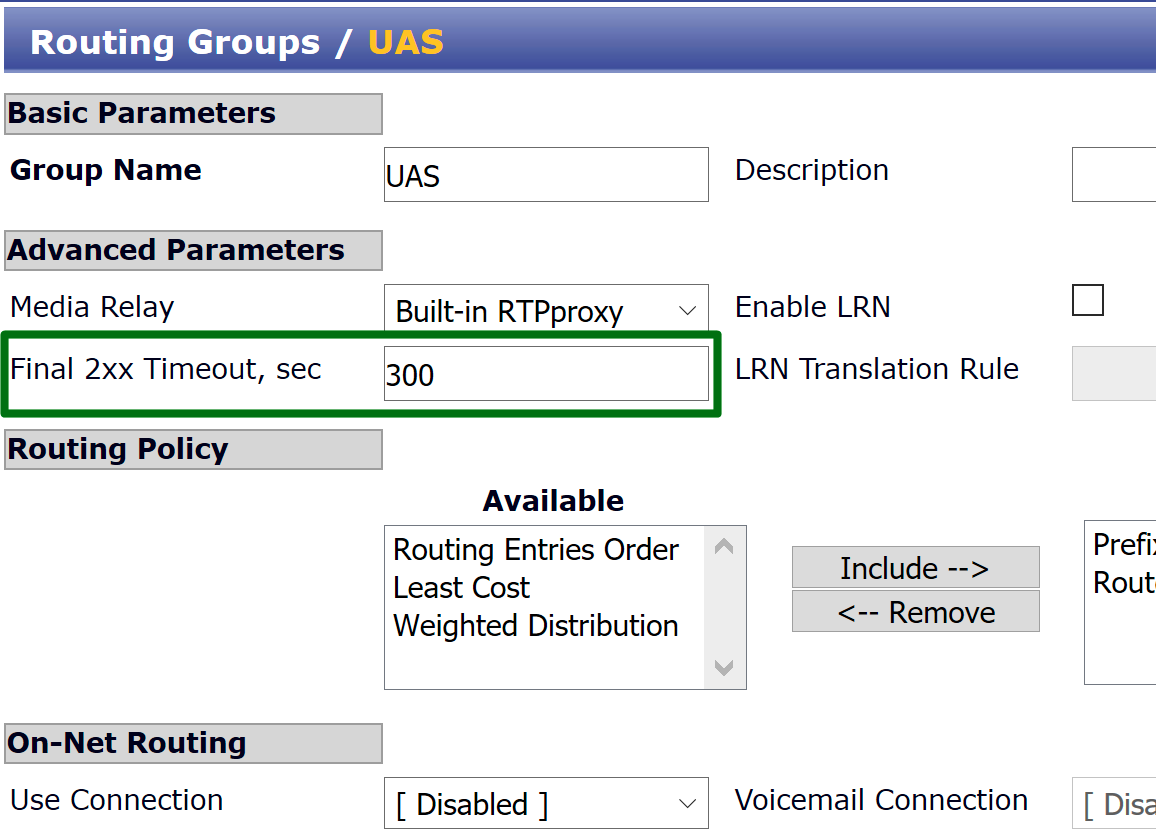 Note: All three timers (1xx, 2xx, and Final 2xx) are fired just after sending the INVITE to the vendor. E.g. with 2xx timeout = 10 seconds, case the vendor/connection is not able to connect the call (send 200OK message to us) within 10 seconds, we're dropping that vendor/connection from the call flow, and either try another vendor or drop the call. This is applied even if the vendor replied with the first 1xx message at the 9th second of the call.

Next step, a user makes a call and 100 Trying is delayed for 4 sec.

As a result, the call is dropped in 2 sec due to 2xx timeout because all timeouts are fired simultaneously. In our case, the first timeout is 2xx which runs out in 2 sec and it doesn't matter that the system should wait for 100 Trying within 4 sec.

5. Max Session Time - The total duration of a call that is allowed once setup has been completed and the call has begun. This parameter is configured on each Account under Advanced Parameters. The Max Session Time affects inbound, outbound, and On-Net calls alike. More information can be found at the linked documents at the foot of this page.

Inbound traffic timeouts and their order

Note: More information can be found at the linked documents at the foot of this page.

From 5.0 Sippy introduced 3 additional on-net timeouts (that were hard-coded till 5.0) that are configurable for each routing group, namely a:

On the current stage, they can be tuned only by Sippy support team via database directly. The default values can be also changed for the system on a permanent basis.

The default value for Sippy's built-in RTP timer is 60 seconds. There are several features regarding the RTP timeout:

Troubleshooting and Identifying calls that are affected by timeouts

Most often, a call that has been ended as a result of a timeout will be interrupted by Sippy with a CANCEL SIP message. By capturing a specific Call ID of an affected call and running a SIP Log Viewer within Sippy's Tools, the SIP Log will display a CANCEL after the specified length of time, as can be seen in the following image. The CANCEL was sent by the originating switch, in this case, identifying a timeout of 15 seconds which is an Onnet call timeout.